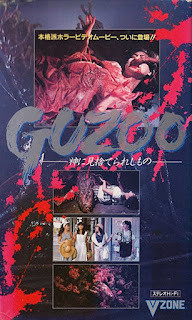 I'm just shocked I never heard of this before. True, it's only 40 min long but damn it's pretty cool. I love practical FX tentacle monsters, and this certainly delivers as it attacks a bunch of cute Japanese girls. Apparently, there is no part 2, which is a bummer. This should have been a series with like 40 movies haha. Alright maybe I'm overselling it a bit but it seems so amazing when you discover something like this and I found a bunch of other short FX Japanese horror films too such as Conton (1987), Cyclops/The Unborn (1987), Gakidama: The Demon Within (1988), etc. These are the kind of cool practical FX movies I want to make. Ok maybe more like John Carpenter's The Thing but who am I kidding I'm never going to have his budget, which is why I'm impressed by what these guys did because it was probably done for pennies. Sure, it has flaws and you can see their limitations but still I think it's fantastic what they pulled off with so little. That's the magic of indie filmmaking. And look at that VHS box. That's awesome. As soon as I saw that, I knew I had to see this. 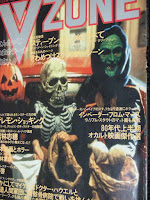 I did some digging and the internet informed me V Zone Video was behind this production. Part 2 was canceled since they went out of business. V Zone was a popular Japanese horror magazine in the 80s but its final issue was in 1987. Such a shame.
Posted by Doug at 9:30 PM