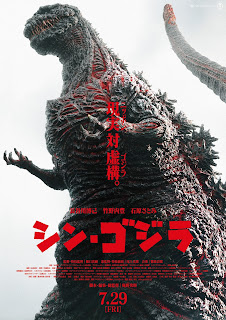 I just got to see this in Singapore (luckily, English is one of the four official languages here so it had English subtitles), and I was blown away. No spoilers, but I think Godzilla fans will be pleased. I certainly was, and then some. There is rather crude CGI at the beginning when you first see Godzilla's tail and his initial appearance leaves a lot to be desired (neat ideas but bad CGI). Filmmakers should really know by now that if you can't do very good CGI, at least don't show it up close. Keep it at a distance and it'll look a lot better (plus, you could maintain more mystery of what it really looks like). The FX improve drastically as the film progresses though, and you get some really awe-inspiring shots of the King of Monsters particularly when he is wreaking havoc on Tokyo at night while glowing red from his radiation scars.

This Godzilla film doesn't shy away from human casualties like its recent American counterpart. In Gareth Edwards's movie, Godzilla crushes tons of buildings especially in the climatic fight with the MUTOs and you know some people were still inside them but you never see any of that. At the end of the American film, Godzilla strolls back out to sea, but if you think about it, he has to be stomping on some poor bastards on his way out. Shin Godzilla isn't quite as hardcore as the 1954 original when a doctor waves a Geiger counter over a group of children and shakes his head in a haunting display of brutal reality, but it's close. Real close, and I love how Shin Godzilla doesn't gloss over the radiation danger either. Being anywhere near Godzilla would most likely be lethal unless you had a serious radiation suit on (people near him actually wear them in this film and keep them on).

You might have heard Shin Godzilla is basically a metaphor for the recent Fukushima disaster and specifically how poorly handled it was by the authorities. Well, that is abundantly clear in the movie so no spoilers there. Some may knock the dialogue scenes, but they're done very realistically the way you could imagine the government responding to such a crisis, and there is plenty of camera movement with unique angles to keep it speeding along.

What surprised me is how mature this movie is. That probably sounds odd given this is a Godzilla movie and few except the original could warrant such a statement but they really illustrate the complex relationship between the US and Japanese governments. Sure, the Japanese actress playing the US negotiator is a bit tiring at times given how she was supposed to have been born in America to a Japanese grandmother who saw the nuclear bombs we dropped firsthand but the pretty young actress struggles a lot with her English (and her American swagger). It's obvious she isn't a native speaker despite that being what the story calls for although finding a native speaker of both Japanese and English must be difficult (not to mention, she has to be a good actress and the right age as well). No movie is perfect (a reviewer admits this? impossible I know). 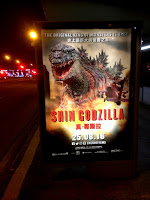 Shin Godzilla almost seems like it was made by people outside Japan. Again, maybe a strange sentiment to some but this film isn't afraid to lambaste its own government. Heck, it even criticizes how Japanese interactions are too rigid and formal with hierarchy being too controlling. Characters get pissed because of all the bureaucratic nonsense and how nothing gets done until it's too late. A key plot point is bringing together a group of Japanese who aren't afraid to speak up and challenge authority so they can actually get shit done. The lead guy blatantly tells them to ignore rank and hierarchy. It's refreshing, and the US is criticized too, but you also have agents of the US like the Japanese American girl doing good behind the scenes as well so it's not some silly one-dimensional portrait of our governments. I never expected depth like that in a Godzilla film, and there are times when you think they're just knocking the US, but then they turn it around or show a counterpoint.

You get to see quite a bit of Japanese culture too. Sure, it's all probably extremely obvious to anyone who knows anything about Japan but still it's neat to see those interesting, self-reflective touches in a Godzilla film, and they're not all rosy either. You see how they will work themselves to death (not literally in the movie but in real life, they have a word for death by overworking), fall asleep in their office chairs, bow to authority even if it's clueless and incompetent, etc.

Alright, stop babbling and tell me if it has some good Godzilla action. Yes, absolutely. I won't get specific but Godzilla's atomic breath is fuckin amazing. It makes Legendary's attempt seem quaint and cute in comparison. I should stop giving the American movie such a hard time. I liked it ok (Bryan Cranston should've been in the damn movie more) and it was a colossal improvement over the dreadful, cinematic pain formerly known as Roland Emmerich's 1998 Godzilla abomination. Let's never speak of that travesty again but pretty much anything would look good next to that. Shin Godzilla is far superior in my mind, and it dares to try new things while honoring what came before (like all the best classic Godzilla music in the end credits, which made me so glad to stay to the end, and some in the film too of course).

I just love how dark Shin Godzilla is. They do have a bad misstep with a rock song weirdly inserted at one point but for all its faults (and again, every film has them), this movie delivers. They got so much more right than the few things they missed. The look of the new Godzilla is badass. He's a true monster, but more than that, this is a serious Godzilla film with real weight and consequences. Someone put some real thought behind it, and I'm not that surprised considering how awesome Evangelion is. Hideaki Anno, you rule. I have no clue how they're going to follow this one up. Will there be a direct sequel or semi-reboot? Either way, I'm in. Let's see whether the US or Japanese sequel is better. Dang, we are spoiled now.
Posted by Doug Roos at 10:52 AM No comments: