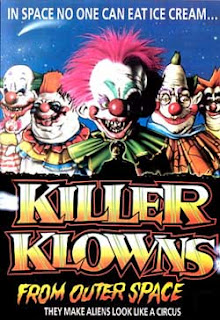 One of the greatest cult classics ever made. Popcorn shooting space guns, cotton candy cocoons, a Godzilla Boss Klown, giant curly blood-sucking straws, face melting pies, what more do you need to know? Are there robots? What are you? 10? What's that? Ninjas? You're seriously asking me if there are ninjas? That's a good point though. Note to self: always include ninjas. No, there aren't any ninjas. But there's an old man and his dog in a cute little homage to The Blob. And there's a creepy circus tent in the woods. And there's a shower scene where clown plants attack a lady. Yeah, that part kinda sucked. I mean... yeah... uh, it was awesome! Best thing I've ever seen. But seriously, I died a little bit inside when I saw that.

The Mooney puppet though is awesome. That's my favorite scene. The lighting is perfect, and it's actually a little unnerving. It helps if you think clowns only exist to drag you under your bed and eat you, which they most certainly do. But John Vernon does a great job in the grumpy cop role, and he completely sells that part.

What else? There's some girl klowns with inflating balloon breasts, and they have the hots for two guys they find. Nothing strange about that. So yeah, question. Old dude sees a tent in the middle of the forest with no paths leading to it. No roads. No people anywhere. No power sources. It's dark as hell outside, probably midnight, and he just wanders inside? What a dumbass. But yeah, that's what I'm nitpicking. Everything else made sense. I love the movie though. I hope they get the sequel off the ground.
Posted by Doug Roos at 5:30 PM No comments: