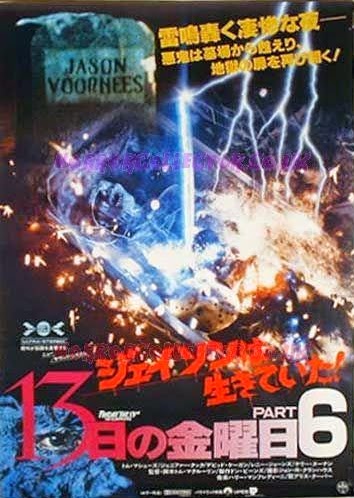 I'll admit it: I'm not the biggest fan of the slasher sub-genre. There are some classics, of course, that I love like Psycho II (yes, I actually prefer the sequel over the original... I'm in a weird minority on that one), Halloween II (same thing... I can't deny Carpenter's original, but I love the ending to this one, I love the beginning, "You don't know what death is!" I love the mask and Loomis, etc.), Friday the 13th Part VI, Scream, but almost all the new ones fall flat for me. It doesn't help that no-budget filmmakers tend to do a slasher with the same old tired formula of teens getting picked off one by one. If it doesn't try to do something new, I just get bored. All the Boys Love Mandy Lane is actually phenomenal in my opinion, and I absolutely love the concept behind Maurice Devereaux's Slashers. It has to be one of the most original, exciting ideas for a slasher film in decades. I'm sure the sub-genre isn't really going anywhere. I just wish more filmmakers would take risks with it and try something entirely new like Tucker & Dale vs. Evil. That was another excellent one, and if you count The Cabin in the Woods as a slasher, I'd include it as well. I don't think it's really that difficult to change it up. For example, I found a new Kickstarter project called The Orange Man that does something I love: your typical teenagers are replaced with middle-aged men. I'm not a huge fan of comedy hybrids, but I think that is a brilliant idea for a slasher. I'm sick to death of seeing teenagers. Maybe I'm just turning into a bitter old man, but teenagers are freakin annoying unless the characters are done extremely well, and most of the time, they're not.

It's funny I started writing this thinking I hated slashers, but actually, all those films above I love so my problem is with the bad, half-assed ones. I tend to agree more and more with my friend Jason about wanting to see the monster get killed. I hate slashers where the victims don't fight back, and it happens so often. It drives me nuts or the damn protagonist trips and falls. Stop doing that! Yes, it might actually happen in real life, but it has been overused so much in slashers that it's unbearable if you've seen any. Probably like most horror fans, I'm dying to see something different, and actually, I want to see more monster movies with practical FX. Those are quite a bit more tough to do than slashers though, which is why we don't have many, but I'd love to see another new, good slasher movie. I'm just a bit tired of being burned by the crappy ones.
Posted by Doug Roos at 2:42 AM 2 comments: