Why is The Crazies remake so awesome? 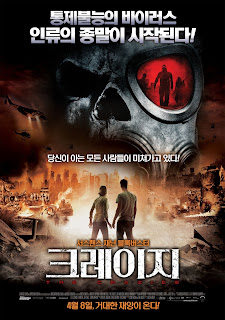 I didn't expect much from this one. I'm pretty burned out on remakes. They just keep coming and coming like an ever-growing horde of decaying zombies with more and more limbs missing so I was extremely surprised to find The Crazies worth watching. In fact, I loved it. For starters, the pacing is brutal. They don't drag shit out. Forget showing the ordinary world for 30 minutes. They turn that upside down 3 minutes in. Not only that but they establish likable characters, give you an authentic small town feeling, and hint that a lot of bad shit is going to happen. I haven't really liked Timothy Olyphant in the other films I've seen him in (although I don't think that is any fault of his own... an actor can only do so much with poor writing), but here he fits perfectly and his performance is great. Plus, you've got a fantastic supporting cast with Joe Anderson (I don't know him from anything else, but he's outstanding), Radha Mitchell (Silent Hill), Danielle Panabaker, Glenn Morshower (24!), etc. Even the guy playing a psycho husband (Brett Rickaby and he actually has a lot of credits) is outstanding. The makeup and FX are phenomenal. Same with the sound design, and you get tension throughout. I like how they flesh out the military a little as well. The movie also has a lot of replay value. I've actually seen it quite a few times, and I still enjoy it.

The only nitpicking you could do (and I guess it's valid for an infection movie) concerns how people get sick, because in one scene, the sheriff clearly gets diseased blood in a wound yet his wife who is a doctor doesn't seem to care, and it apparently has no effect on him (or maybe it does but we don't see it in the film's short time span). But hell, everything else is so good, I don't care. This film doesn't play nice either. It'll kill characters you care about in a heartbeat, and I love the three homicidal hunters. I was kinda shocked the director of this made Sahara. I don't remember anything about that movie except wondering why I wasted my time watching it, but The Crazies is superb. Dark and bloody with characters you root for.
Posted by Doug Roos at 5:13 AM 1 comment:

Email ThisBlogThis!Share to TwitterShare to FacebookShare to Pinterest
Labels: remakes, review, the crazies 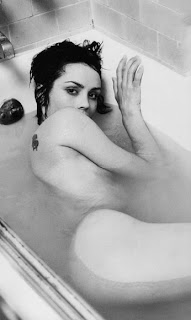 I never saw Devour, Catacombs or One Missed Call (the remake) so I can't say anything about the horror films she has been in, but if they suck (and the reviews don't seem very flattering), it's not her fault. She is excellent in The Rules of Attraction and Kiss Kiss Bang Bang. Both are also amazing films. I was curious about The Day, but I'm a little tired of post-apocalyptic movies without any monsters, and I'm worried that is the case there. But it's probably still good. I'll definitely check it out one of these days. I just need a break after The Road, The Divide, and The Book of Eli. We need some more good monster movies. I can't wait for Harbinger Down. If there's one thing the world needs more of, it's old-school practical FX. 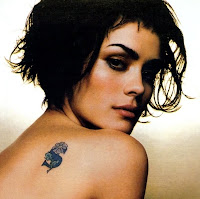 I grew up on The Green Slime. 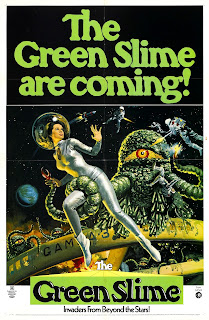 Well, that and Aliens. And Predator ("I'm heerrrrreee... kill me nooooowwww!") and a ton of Godzilla movies. So yes, I love this movie, and I'm a little sad it has a 4.0 rating on IMDb. I guess a lot of people think it's cheesy and stupid. I suppose the opening song is pretty goofy, but I don't care. I remember seeing this as a kid and having it blow my mind then trying to figure out what the hell it was called as an adult. I rewatched it recently, and I still think it's awesome. Even if it's a little dated (ok, very dated), that is part of its charm. But really this story doesn't waste any time. Within the first few minutes, you find out an asteroid is on a collision course with Earth. They quickly put together a team to land on it and plant bombs. By the thirty min mark, they've already blown it up. So what took Armageddon 2 hours and 30 min to do, they've finished in their first act (by the way, Armageddon has a 6.4 rating on IMDb... what's wrong with this picture?). 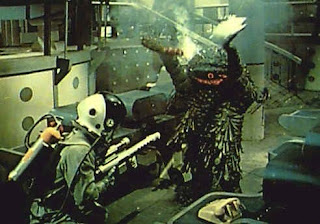 Then of course, you get the best part: the monsters. And since this was shot at Toei Tokyo Studios with a Japanese director, they have tentacles. Alright, maybe not every Japanese drools over tentacles, but they seriously show up a lot. They even have a special subgenre of porn with them... yeah. I'm not joking, and it's weird. Girls wrapped in tentacles with the slimy things going in certain places... I don't understand the appeal. And it's basically an FX show since you need guys to operate the damn tentacles offscreen. What's worse is when I told my brother, he replied, "You didn't know?" I guess I shouldn't be surprised. Anyway, some might complain the monsters are ridiculous rubber pieces of shit. Yes, they could be better, but I love 'em. Sure, they don't compare to Giger's famous xenomorph or Stan Winston's skull-totin' space hunter (in fact, next to them, yeah, they look awful), but this movie was made in 1968, and it's easy to see the great imagination behind them even if they couldn't execute it perfectly. Yep, I'm probably the only person who loves this movie. What can I say? I have a soft spot for monster movies. But come on. This is a million times better than Armageddon.
Posted by Doug Roos at 12:28 AM No comments: