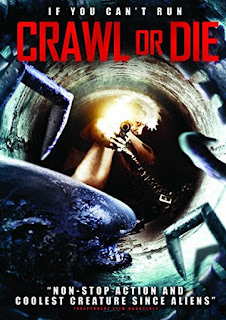 When I heard about this indie, I had no idea how they were going to stretch the tunnel scene from Aliens into a feature-length film without it getting repetitive and boring, but damn, they did a fantastic job. There is a lot of incredible tension throughout, using simple but perfectly effective sound design to keep you on edge. You get different types of tunnels with some being dirt instead of metal then they keep getting smaller and smaller so the claustrophobic feeling is undeniably palpable. I have no claustrophobia at all, but you can't help it watching this and imagining yourself in that situation. What they went through to make this especially the lead actress when she is breathing in that dirt is fuckin horrible. They really suffered for their art, but I think it pays off.

My only complaint is I wish they didn't show the creature's head so much because it resembles Giger's famous Alien except it looks fatter and not as textured or if they could've changed the design of its head to be drastically different, I think they could've sidestepped negative comparisons. The monster looks pretty amazing otherwise like that first tail shot. That was executed brilliantly. You get a part later on where these long spider-like tentacles or thin legs come out of the tunnel, and that looks awesome, showing enough to get your imagination going but not showing too much to spoil it. It's a fine line, and I guess people complained about wanting to see the monster in full, but sometimes, that just isn't a good idea if you don't have enough resources to pull it off convincingly. 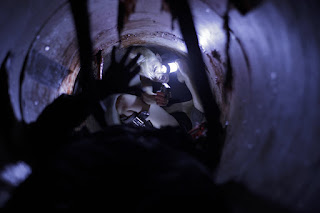 I listened to a podcast with the director and he talked about an earlier cut where he didn't show the monster at all. They just had sounds, but I think the issue with doing that on a micro-budget indie is people assume (unfortunately) that you lacked the ability to do it, not that you artistically chose to never show it. Plus, I think you can show a little, and that can go a long, long way. For example, instead of just having a shot of a dark forest where there is supposed to be something out there and using sounds to get that idea across, I think it's much more effective to have a shadow move. You don't need to show what it is but have stillness and then have it move. I like the idea of just sounds especially being reminiscent of earlier horror films like Robert Wise's The Haunting, but people make incorrect assumptions and are extremely critical of no-budget horror. Audiences are more demanding now too. I also liken it to reading a book where you get a small vague description of a monster such as "an obese mishmash of teeth and claws swaying in the shadows with its tentacles stretched out like an enormous spider web," which is plenty to conjure up a gruesome picture in your mind without overdoing it. If that book had absolutely no description of what the monster looked like, would it be nearly as effective?

Anyway, I really recommend you check out this movie if you like indie horror. Tank is a cool character, and they made a very tense little film. I love the scene where she falls asleep, and it's slowly sneaking up on her. The cinematography and music are perfect as well. You can buy a signed copy of the film at crawlordietrilogy.com. So do it and support these talented filmmakers.
Posted by Doug Roos at 1:24 AM No comments: