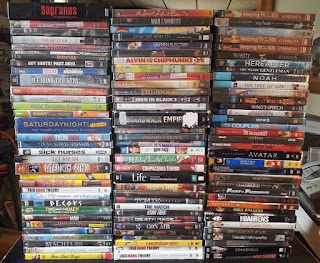 We all mourn the loss of video stores (and their badass cover art), but the truth is it has never been easier to watch films on so many platforms in so many ways with more titles available than ever before. You can still search for those undiscovered gems but now you'll just have to explore online, digging through the vast expanse of the indie explosion. You'll definitely have your work cut out for you but isn't that a clear sign of how spoiled we are? There is so much content now (and damn good content too... all the best films from 89 years of filmmaking if you count 1927 on) that most people can't even take full advantage of it (I know so many people who have Netflix but don't even watch it... just don't get me started on people who think there is nothing on there because damn folks, open your eyes).

Some complain about too many superhero films but we're still getting great original horror (Starry Eyes, The Babadook, A Girl Walks Home Alone At Night, Under the Skin), action (The Raid, The Raid 2, sorry nothing else compares to them), sci-fi (The Martian, can't believe we got a good realistic Mars movie... anyone remember Red Planet or Mission to Mars? good grief, those were awful), etc. I can name so many unbelievably good films that have come out recently: Sicario, The Hateful Eight, The Revenant, Creed, Cartel Land, The Invitation, The Gift, etc. And if you don't like modern titles, the classics are in the best shape ever with Blu-rays, streaming, etc. Sure, some are only on DVD and some haven't made the transition yet but with eBay, VHS is easily attainable. You can have such a massive collection now! Past generations could only dream of owning so many movies (heck, no one could really own any until the '80s unless you had insanely expensive film prints). For crying out loud, you can make your own video store in your basement (and with VHS, it'd be cheap!). It's nuts. I think we should all take a step back and appreciate what we have.
Posted by Doug Roos at 3:37 PM 2 comments: