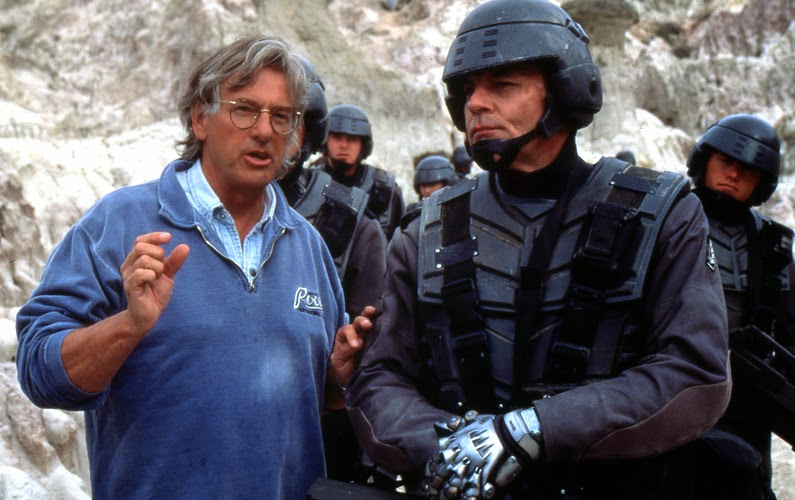 Paul Verhoeven was really on a roll there for a while: RoboCop, Total Recall (fuck that remake! in fact, fuck all remakes! well, not The Thing or The Fly or The Blob... dammit '80s remakes don't count, just the money-grabbing bullshit they pump out now), Basic Instinct, and this glorious bugs vs. human bloodbath. Sure, we also got Hollow Man and Showgirls, but the man gave us ED-209 blasting huge red craters in a corporate numskull and don't forget about "Quaaaiiiiddd" or the freakin awesome Johnnycab scene. Heck, RoboCop, Total Recall, and Starship Troopers are pretty much a perfect holy trilogy. They're masterpieces. Any filmmaker would be lucky to make one of them, much less all three. 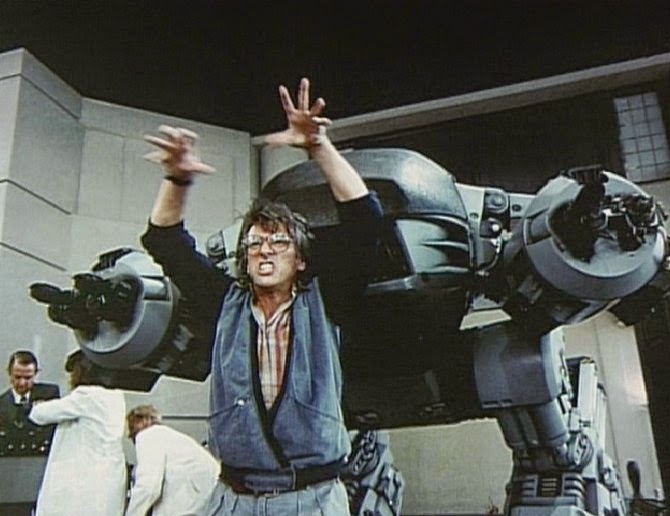 "You have 10 seconds to comply." Best line ever.

And did I mention Michael "I make fuckin Highlander II good" Ironside? Alright, Highlander II still sucks, but Ironside is the king of awesome. I'm actually tempted to re-watch Highlander II because of him. That has to be some kind of miracle. Seriously, no one should ever be subjected to that film again. I'm pretty sure that'd be a human rights violation. Fine. I confess. I like that movie. It's awful, but Sean Connery and Michael Ironside make everything better. Not to mention, there are much, much worse movies out there (Raptor comes to mind... jeez it's definitely a whole new level of wretched when you're reusing footage from your other crappy movie).

Back to Starship Troopers. What's not to love here? Sure, they have some CGI, but it's done well, and they also have a ton of practical FX too. This movie is a great example of how to blend the two and not overdo the computer shit (take note studio dipshits! yeah, they don't care). Plus, the characters are great fun, you get some fantastic gore, and even a bit of nudity. Don't forget the badass score by Basil Poledouris (he also did the incredible music for RoboCop). The real question is why the hell didn't the studio give Verhoeven and Neumeier a bucket load of cash for a sequel instead of the embarrassingly small, straight-to-DVD crap they put out. Oh well, at least number three was better but nowhere near the original and still obviously hampered by a tiny budget.

I actually cared about Johnny Rico and his high school buddies. You even get Clancy Brown in a great supporting role and Doogie Howser. This is how you do an epic, sci-fi war movie. It's funny with plenty of satire, but it's also gripping and good. It doesn't shy away from showing the horrors of war. Even an imaginary war with giant bugs. I'm not a huge fan of '90s movies, but there were some damn good ones (Demon Knight!). So all I got to say is Paul Verhoeven, I salute you. Now, take over Hollywood again!
Posted by Doug Roos at 9:52 AM No comments: