The Perils of Filmmaking in Tokyo 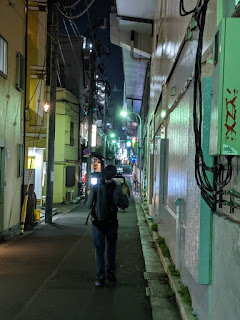 Yes, that idiot in the photo is me. So how is Tokyo different from a big city in the US? Some things you just can't get here. Well, you can order them from overseas but shipping is gonna cost you. Good luck finding FX stuff. Those 8 TB external hard drives you need so much. $25 more a piece for the same thing. Hey, $25 isn't that much? The problem is all those little price hikes add up. And pretty much everything is more expensive. 100 Yen stores (like our good ole $1 shops) do really help though and the quality seems better in Japan at those stores.

But if you're like me, you have to bring back a bunch of gear on the plane. Then depending on where you're filming (and whether you're doing an FX heavy movie or not), you might need a storage unit because space is extremely hard to come by in Tokyo.

Shooting outside is very tricky too. You better be ok with people in the background because an empty street is hard to find and usually once you find one, it doesn't stay that way for long so you have to wait (particularly difficult on long streets). Or you can try to remove unwanted cars and people in post (not recommended). Random pedestrians coming and going can create continuity nightmares unless you're very careful with your shots. But Tokyo is of course an extremely cool and unique shooting location so I'd say it's worth it. The noise from trains, cars, bikes, etc. is another hassle but that's a big city for you (heck, even in the woods of rural Missouri I was surprised how many planes and distant cars you could hear).

I don't think actors are too hard to find with such a large population especially if you're filming inside Tokyo. One invaluable tool to help you would be Cinema Planners. That website is amazing and completely free to use. You might need someone to help you post in Japanese or you can try your hand with Google Translate (risky) but it's a phenomenal resource. Meetups can also be good too for connecting with actors and crew.

So is it more difficult filming in a foreign country vs. your own? Unequivocally, I think that answer is yes. The language barrier really can't be underestimated since it can become an obstacle in so many ways: the script, finding people, communicating with them (not just on set but messaging prior to get them there and make sure they have what they need), etc. Misunderstandings are inevitable. You probably also don't want to just take an idea imagined in one country and throw it into another since cultural differences could make it irrelevant or silly (at the very least, some revisions might be advised). You need to know the place and the culture where you're shooting unless the film is about not knowing and being an outsider (even then you don't want to incorrectly portray the culture and place where you're shooting so research is essential and obviously you should respect both).

Tokyo is an extremely interesting, amazing city. One of my dreams was to make a movie here so I feel very fortunate to have such an opportunity. Any time you create a film you have to expect it to be difficult. Problem solving is like 99% of filmmaking but it's also incredibly fun and exhilarating. After all, the more you roll with the punches, the better you get at it and the more you learn.
Posted by Doug at 4:19 PM No comments: 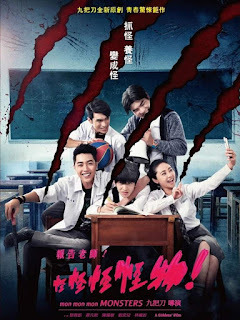 The bullying is hard for me to get through but the payoff is awesome. That last scene... wow, and the scene before that, wow. I'm trying to avoid spoilers so just watch it. I love it when a film makes you care for the monsters. This does that in spades (what a weird expression). And I don't think I ever saw a Taiwanese horror movie before. Way to go guys. You knocked it out of the park (trying to hit my idiom quota for the day... let's put some more cliches in here). We've seen stories like this before but not exactly. The execution is what makes all the difference. The tiny details and the big swings at the end. It's really amazing, and I still feel bad for what happened in this film. That's a great movie. Now they really need a better poster for this thing. Seriously. I saw a badass Blu-ray cover though. A monster and bubble gum. Such a brilliant scene. This film better get some more love or I'm gonna cry. Thank you, Shudder.
Posted by Doug at 8:52 PM No comments: