I skipped the sequels to The Lost Boys (and I don't think I missed much), but she's in the third film, and she stars in the follow-ups to the Death Race remake. Again, I didn't see them. She has a part in Wesley Snipes's long-delayed Gallowwalkers too, but I have no idea if that will be any good or if it will ever actually get released. So yeah, I haven't seen her act in anything, but she is quite beautiful. The photo of her with a flamethrower from Death Race 2 kinda makes me want to watch that movie although I'm sure it'll only leave me disappointed. 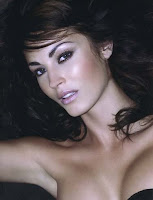 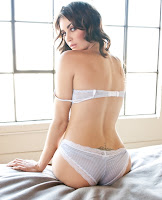 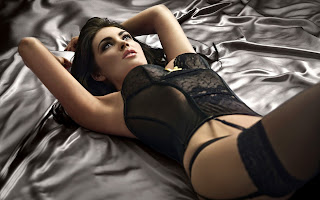 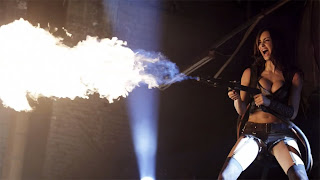 Hara-Kiri: Death of a Samurai may actually be better than 13 Assassins. 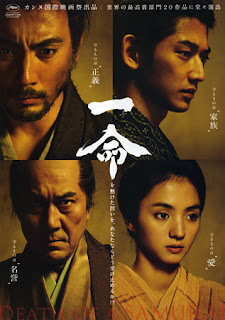 Hard to believe I know, and yes, I love Ichi the Killer too (I even enjoyed the craziness of Izo), but with Hara-Kiri, all the typical weirdness you might expect from a Miike film is gone. Here you have a true master with 90 directing credits to his name showing you how it's done. He's through playing around, and I don't think anyone can ignore his talent. This movie easily ranks up there with Kurosawa's Mifune classics. Heresy you say? I don't think so. True, it's a remake, but does that make John Carpenter's The Thing any less of a masterpiece? No. The way the story unfolds, the gorgeous cinematography, the superb acting, the excellent music, the amazing attention to detail, etc. It's all as good as it gets. When the end credits rolled, I was shocked to discover some CGI was used, because unlike 13 Assassins, which was fucking awesome aside from the really-shitty-looking flaming-bulls near the end (and I could've done without the little naked kid peeing), Hara-Kiri's computer effects are absolutely seamless. Now, I know it's stupid of me to say anything bad about 13 Assassins when that movie is undeniably fucking awesome (I just really hate bad CGI especially in classic-style period films), but my point is Hara-Kiri doesn't have a single thing I can nitpick. It's that good, and yes, I do tend to nitpick. But Hara-Kiri is flawless. It even managed to get to me emotionally, and I wasn't expecting that. Only a few movies have ever done that... yes, my heart is a burning pile of ash.

It just proves you can't pigeonhole a filmmaker. Before 13 Assassins, who knew Takashi Miike could make a film like that? Thankfully, someone was smart enough to trust him and let him show us all we don't know shit about what he's capable of. It's so crazy looking at all the movies he has done and how he makes 2 or 3 almost every year. That's just insane, and yeah, some of his films are pretty nuts, but damn, he's inspiring.

Spoilers. Using the bamboo sword at the end (especially after he says his sword was his most prized possession and then it's revealed he got rid of the blade) has to be the coolest fucking thing ever. And I was told that isn't in the original. What a brilliant fucking idea. He doesn't need to use a real sword. He can humiliate them all with a bamboo one. Yeah, I'm a loser, and I love samurai films a little too much, but Hara-Kiri is fucking awesome.

Some reviewers said it was a little cold and distant emotionally. For me, seeing those two adorable innocent kids who had nothing to eat but some water and the tiniest bit of vegetable really got to me especially when the boy wanted so much to catch a fish for Miho yet you know the awful fate that awaits them. A lot of the film's heart is in the details like Miho's father telling them to go ahead and eat since he's meeting someone, but you know the truth is he just won't be eating and he doesn't want them to know.

I really think that time period is by far the most interesting for the samurai since you had what used to be a rich upper-class caste forced into extreme poverty as the entire country underwent a massive change and the way each individual reacted to such a grim situation says so much about their character. It's perfect for drama, and in some ways, how one deals with such overwhelming adversity, how one confronts the end, reveals the deepest truth of all about who we really are as people. Yep, I'm a loser.
Posted by Doug Roos at 12:53 PM No comments:

Confession time: she hasn't done any horror movies. Yep, I'm a terrible person... I'm destroying the sanctity of this very-deep-and-insightful, not-just-a-bunch-of-hot-girl-photos column. Yeah... nobody cares. She hasn't done one yet so I'd like to be the first to nominate her for future horror queen. Come on. She was in Here Comes the Boom. No horror movie could be worse than that. Did I actually see it? Let's be serious... did anyone see it? Now, who wouldn't want to see this girl in a horror movie? Somebody dropped the ball... Hollywood, shame on you. Please correct this extremely serious oversight right away. Nothing could be more serious. Nothing. Correction: a studious commenter informed us she was in a tiny-budget horror film called Repost This... Or Die! but sadly, it seems you can't watch this film anywhere.

I thought I'd love The Collection, but I don't. 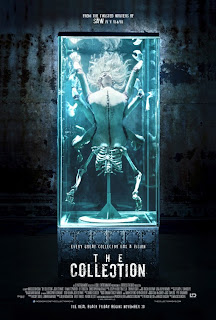 The Collector was pretty damn good so of course, I was looking forward to the sequel (yes, I still love a good sequel... Terminator 2, The Dark Knight... even if they are rare). Then people started comparing it to Aliens, the greatest sequel of all time in my opinion. I should've known it couldn't live up to that, but the idea of it going in that direction was interesting, and I liked that Arkin was back. The opening was rather excellent despite seeing a lot of it in previews. Even the credit sequence had a great style that reminded me of Seven without blatantly ripping it off, but when the Aliens aspect kicked in, the problems began. I love Cameron's masterpiece, and I was really curious how this movie could be similar. Unfortunately, it's quite obvious, and it's even more obvious they didn't understand why Aliens works so fuckin well. Yes, it has heavily-armed badasses underestimating a foe that will utterly annihilate them, but the characters are what matter. You care about Hicks, Hudson, Vasquez, Drake, Apone, Bishop, Newt, even Gorman! You don't want to see them die. They all have unique personalities, traits, etc. Even their armor was decorated individually by each actor. The Collection forgets to make you care about its characters. The team that asks Arkin to lead them to the masked psychopath is just a bunch of people with guns. Beware there are spoilers from here on out. Even the tough guy who convinces Arkin to go with them has only the barest of development: he always protected the kidnapped girl, and he is loyal to his employer, but you really don't know shit about him. Why is he so loyal? Who the hell is this guy? When they get to the psycho's lair, why didn't he phone the cops just in case something went wrong? Or at least, tell the girl's father where they are so if he fails, all isn't lost. He could've brought more guys too. 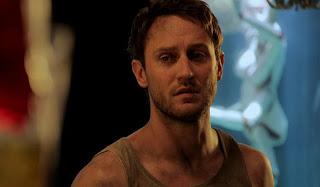 I care about Arkin because of the first film, but even he bothered me a bit when he seems so chicken shit to "go back out there." I can't help but be reminded of Ripley. Yes, you knew she was plagued by nightmares, she was deeply afraid, but she was still brave as hell (remember her phone call to Burke? how she stood up to Gorman?), and I think they compromised Arkin a bit to try to underscore how intimidating their villain is. They do fix this later, but by then, it's a little late and seems too abrupt of a switch. I have to say I love the beginning and the end. There are a lot of cool ideas in the middle, but the fact you don't know any of the characters really hurts the film... I actually got a bit bored. More is done with the kidnapped girl, and that's pretty good although her loss of hearing never really pays off at all, and they forget to continue developing her beyond the first few scenes (she becomes the helpless crying victim who must be saved). But what about the ultimate badasses who get butchered? They may as well be faceless mannequins, because they have no defining qualities. There is a bald asshole, a black guy, a freaked-out white guy, and a girl. When they bite it, it means nothing. They are just there to add to the body count and show more gore. It's really a shame and a missed opportunity in that way. 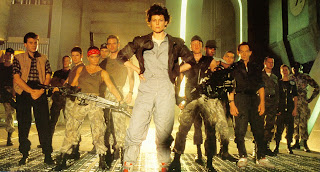 I keep going back to the Aliens comparison. I think it's cool and inventive they tried to take a slasher sequel down that road. They even have a way of adding more "monsters" for one sequence in the bad guy's hideout, but still, I'm disappointed. Ripley hesitated to go with the marines just like Arkin does. Ripley agreed only to be an adviser. Arkin agrees only to take them to the place. Not go inside. Arkin lacks a good motivation for even doing that though. Ripley's life was really ruined by her first experience with the Alien. Besides the horrible nightmares, she couldn't get a good job, she needed psyche evaluations, etc. If she went back out there, the company agreed to reinstate her license. It was a second chance. For Arkin, maybe it was a way to guarantee his family's safety if the lunatic was caught or perhaps it was a way to redeem how he left the girl earlier, but they don't really play any of this up or give any real motivation aside from a general "catch the bad guy and kill him," which they forget to show how much that should matter to Arkin. Then when they're at the killer's place, Arkin has to be forced at gunpoint to go inside. I get that he is different from Ripley. He is a thief, which is part of what made the first film so unique, but I would think he would want revenge on the sick piece of shit that tortured him and threatened to go after his family. Instead Arkin comes off as a coward who is hard to root for. When Ripley goes against Gorman to save the marines, she is a courageous hero. There is a huge difference between these scenes.

They really forgot to include actual characters in The Collection, and that is its biggest flaw. The team that goes in to rescue the girl really needed to be developed more so you care when they die, so there is more tension, etc. Otherwise, it's just watching random faces get hacked up, and after you've seen so many horror movies, that does nothing for you. Still, I wouldn't say it's a complete waste. I love the opening and the ending. The ending is a little strange in that they save so much for those final few moments (and I'm frustrated they still don't reveal someone's identity although maybe that was the best choice to not disappoint the audience even more), but regardless, the last scene was the best part.
Posted by Doug Roos at 10:00 PM No comments: