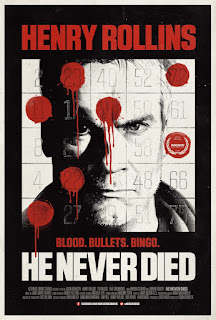 I'm a big fan of Henry Rollins ever since I saw him in Wrong Turn 2 so when I saw he was headlining this film, I had to check it out, and I wasn't disappointed. They do have a smidgen of CG blood at one point that isn't really necessary but I thought the film was fantastic especially thanks to the great sound design. It really helps you get inside the mind of his character. Then they hit you with some brutal violence and give you some nice black humor to top it off.

The bingo bits are hilarious, and I like the journey of his character, trying to remain detached but failing. The story on who he is and why ties everything together nicely. It's just a well done film. I'd definitely watch it again. Mr. Rollins really carries the whole picture with ease. Hopefully, he gets some more good roles soon.
Posted by Doug Roos at 10:00 PM No comments: