Memories of Murder (2003) is deeply unsettling and haunting. 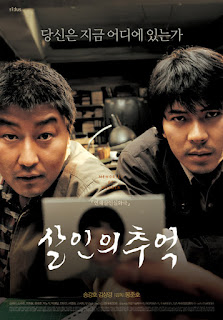 How can you not love Korean cinema with films like I Saw the Devil, Oldboy, The Host, The Man from Nowhere, A Tale of Two Sisters, A Bittersweet Life, etc.? Unless you've been sleeping under a gravestone, you know they've been knocking it out of the stratosphere for a while now. Well, this film is no different except unlike the others, it's based on a true story, which really makes the reality hit home, and damn, is it quite disturbing. I don't want to spoil the movie, but I can't talk about it if I don't so if you plan on watching it, just know it's really, really good (IMDb's top 250). Now stop reading and see it. You can thank me later.

I'm going to ruin the ending, which actually doesn't matter and does matter more than anything all at the same time. Again, fair warning: don't read this until you've seen it. Seeing the journey of these two detectives and how they slowly switch places as they desperately try to solve a string of murders gets under your skin especially when you realize the deeper meaning at the end. Never catching this killer would be such an unbelievable hell to endure and coming so close would only make the pain that much worse. It cements the fact I would never ever want to be a detective. You have to admire these people. It's truly a terrible job.

But this film is so well done on so many different levels from cinematography to performances to writing. Absolutely everything is top notch. You get some humor albeit a bit dark at times then you get your gut-wrenching horror. Who knew pulling off a band aid would be such a cataclysmic event? And it really sticks with you particularly that final moment between the former detective and the little girl. Early on, you hate this guy for faking evidence and beating confessions out of people but by the end, you truly understand him. What makes him tick is haunting. That word perfectly describes this film. They don't need any cheap tricks here. Keeping it classy and clean makes it all the more heartbreaking and real. Sure, you get your dead bodies but they don't focus on blood or nudity or anything like that. You've really got to applaud them for making such an incredible movie. It makes you think and feel and sticks with you long after the credits roll.
Posted by Doug Roos at 2:17 AM No comments: