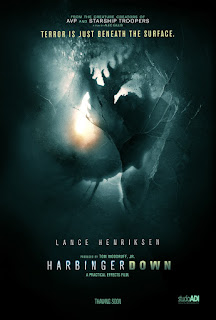 I was extremely excited for this new practical-FX horror film (seriously, we need more good old-fashioned REAL effects!), and I had never been to a premiere in Hollywood before so I knew I had to go. I never met any celebrities before either (I saw Savini at a convention once but didn't dare talk to Sex Machine). Of course, I had seen Lance Henriksen in Aliens, Terminator, Pumpkinhead, Near Dark, heck even Piranha 2, which really isn't that bad (Cameron improved it a crazy amount before he was unjustly fired... the foreign producer just wanted an American name on the movie while he ran off to shoot topless scenes on a beach! quite a behind-the-scenes story if you haven't heard it). So clearly I was a fan of Lance (Millennium! Hard Target! damn I love Hard Target and Lance plays the villain so well! Stone Cold too! over 200 acting credits according to IMDb). But I was a little wary... you know what they say about meeting your idols and I knew I would come off like an idiot fanboy, which I am! Bishop! I was going to meet freakin "not bad for a human" Bishop! And I haven't even read his autobiography yet (hey, I'm overseas... shipping is impossible and they don't sell it here). The guy learned to read by reading scripts! Buy his freakin book here! 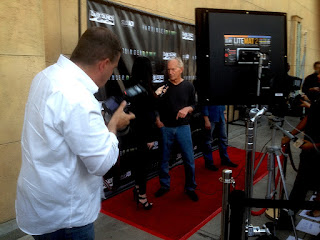 Lance is the man.

The event took place at the historic Egyptian Theater on Hollywood Boulevard. Alien premiered there in 1979 (pics below!) so simply going there was a big deal for me. If you haven't guessed, I'm an absolutely insane Aliens fan: Kenner toys? Got them all. In their packages, and yes, I care. Snake Alien and all (sounds even more ridiculous when you type it). Even the original 1979 Kenner Alien doll. Saved up and bought it in high school. Posters, models, Chestburster shirt, even pins and puzzles. I ran the Alien Legend fan website since I was a teenager. 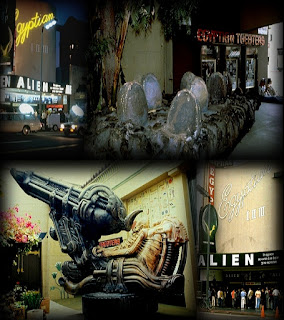 Wish I could've been there!

Not to mention, meeting Alec Gillis and Tom Woodruff, Jr., two of the biggest names in the FX business who worked with Stan Winston on Aliens and countless other phenomenal films (Winston's son even acts in the movie!).

Don't let this guy in!

True, I had a 13-hour flight to get there and the plane tickets were damn expensive but it was absolutely worth it. The film has some fantastic creature effects, and Alec was sure to thank all the Kickstarter backers at the beginning of the premiere (I was a bit worried we might be forgotten but he is a man of his word as Lance later told me). I won't go into spoilers, but immediately when the film started, you could sense the excitement in the air and everyone cheered at the first shot of space (and at Lance's classic introduction).

The after party was a lot of fun. These things can potentially be slightly awkward with everyone vying for time with the stars, but I had a chance to meet Lance and get a photo with him. He was very friendly and the type of kind, appreciative man you'd hope he would be. I chatted very briefly with him about James Cameron (my favorite filmmaker obviously... can't beat Aliens, Terminator, T2, The Abyss, True Lies, etc.). He told me how Cameron is an extremely hard worker. Always the first one on set and the last to leave. 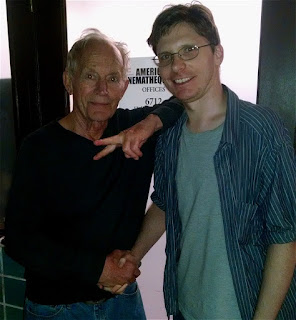 I'm the idiot on the right.

I also spoke with the lead actress and a few more of the cast. They were all very nice and talked quite a bit with me. There was a cool little photo op in the courtyard in front of the theater where you could take pictures with one of the monsters, a piece of the set, and some of the props. I also exchanged stories with some other Kickstarter backers especially some guys from Chicago. I wish I would've done that even more. It's always great talking to fellow horror fans and movie lovers. I met a great Swiss guy who came all the way from France.

I got a picture with Alec, and to my surprise, he invited on a tour of Studio ADI the next day. That was pretty amazing, seeing a huge Tremors graboid on the wall and the brain bug from Starship Troopers along with life-size Aliens and Predators (even the Queen head from AvP... can't stand AvP but the Queen's head was cool). Alec was very laid back and honest. Felt like you could talk to him about anything. Then you remember this guy has worked with the very best in the business (Ridley Scott, David Fincher, James Cameron, etc.), but he was very down-to-earth and generous. We got to roam around and take photos. It was incredible. I grew up on Aliens, Tremors, Starship Troopers, etc. so the experience was pretty surreal, and like a lot of fans, I always wondered why Hollywood kept using so much CGI like for the awful remake/prequel of The Thing (tax incentives! I couldn't believe it when Alec explained it all in interviews... what's wrong with Hollywood? there you go). 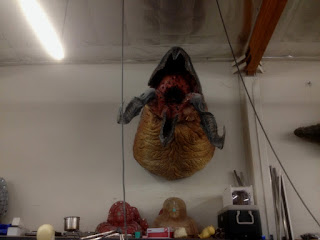 Definitely be sure to check out Harbinger Down when it hits theaters this summer in the US on August 7th especially if you're sick of Hollywood's CG crapfests. For what it's worth, I don't hate CGI (superhero films pretty much require it and I love The Avengers as much as the next guy). I just hate CG blood and how overused CGI is now particularly in horror films where practical would be so much more effective. For my own films, it's all practical.
Posted by Doug Roos at 12:29 PM 1 comment: