Just found this. I had read about this alternate ending before, which was supposedly used in some TV versions. I'd still like to see the MacReady blood test ending, but I'm sure that'll never get out, and it's not like it'd be riveting to watch anyway. The deleted Burke cocoon scene in Aliens should've been a lot of fun to see, but it was just disappointing and awkward (Reiser's performance in it was terrible). Of course, that makes sense since Cameron didn't put it in the Special Edition. Still, it's interesting to see new footage. Feels almost like a glimpse into dimension X.

This better be rated R with a ton of squibs and practical blood FX.

Alien and Aliens: the perfect combo. I love them. I bought pretty much anything with their logo. I even love the Kenner toys. Yes, they suck. I mean they are ridiculously awful (Bishop has a giant fuckin gattling gun! did they watch the movie?!?! he gives back the pistol Vasquez tries to hand him), but I still love 'em. Anyway, in honor of that, feast your eyes on these: 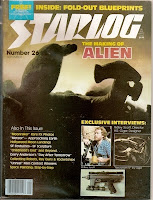 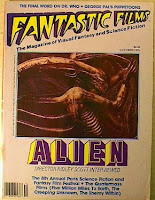 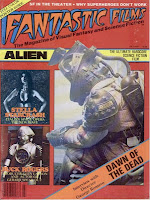 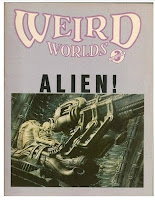 I always loved going to VHS stores and roaming around the aisles, looking at all the covers. Pumpkinhead was always one of my favorites. The design of the creature is outstanding, and I just found this UK VHS cover I had never seen before.

And here's my shitacular drawing of him. 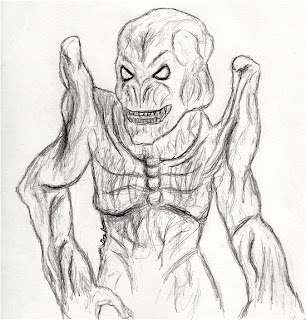 Is Avatar really Dances with Wolves in space? 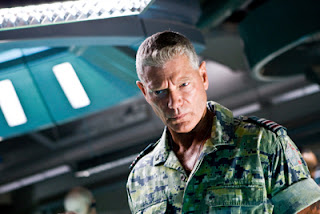 Even Cameron himself has said as much in response to critics trying to use this against the film (and this was clearly a conscious decision as proved by the Native American dreamcatcher in Selfridge's office). Since everyone has pointed out how much the two are alike, let's look at how they are different:

1) Jake is a paraplegic. You don't often see tentpole sci-fi blockbusters where the lead is stuck in a wheel chair. True, there's a way out of this for him, and Cameron is repeating his own work on Dark Angel, but still, he deserves some credit.

2) The very title Avatar highlights a key story distinction and something we haven't really seen before in live action: transferring one's consciousness into an alien body.

3) The planet Pandora with its unique wildlife, landscape, and bioluminescence. Yes, there are horse-type creatures, but there are also many, many others that are completely original.

4) Sigourney Weaver's character Grace is not in Dances with Wolves. Neither is Norm or Trudy (she would've been the equivalent to a Union soldier defecting to help Lt. Dunbar). Most importantly, there is no Colonel Quaritch. Considering how crucial he is to the narrative of Avatar (main antagonist, present from beginning to end and my favorite character), this is a pivotal point.

5) The ending is not the same at all. Dances with Wolves is rather anti-climatic and depressing. Avatar is anything but, and it has like 30 min of amazing, extremely-well-choreographed action.

These are just some of the major differences, but there are a ton more. Obviously, Avatar is not simply Dances with Wolves in space. That is a rather crude unfair assessment. Rewatch them both back-to-back to see what I mean. I really liked Avatar, and I'm anxious to see what Cameron does with the sequel. If there's one person who understands how to make a good sequel, it's him.

But it's interesting to look at what Cameron and Ridley Scott are doing right now. Cameron has gone more toward PG-13 love story epics (Titanic, Avatar) while Scott is still going hard R with a return to his Alien roots in Prometheus (plus, he gave us Gladiator, Black Hawk Down, American Gangster, etc.). Both have now embraced 3D and are working with pretty monumental budgets. I would argue both are still at the top of their game although I wish Cameron would go back to R-rated fare (you can't beat Aliens, Terminator, T2). I know the rating doesn't necessarily dictate quality, but if you compare Aliens and Avatar side by side, there is a distinct contrast compounded by the gritty nature of the former with its harsh language, gruesome on-screen deaths (plenty of the red stuff), and nightmarish xenomorphs. People still die in Avatar, but their face isn't getting melted off by acid. Ah, the good ole days...
Posted by Doug Roos at 10:35 PM No comments: