Why The Thing Prequel Sucks

This is how painful it is to watch this piece of shit.

1. The mystery of Carpenter's infamous opening has been replaced by a typical boring "We found something so let's investigate even if it came from a spaceship and looks like a monster that will more than likely devour us." The film doesn't start in medias res to shake things up, which might be a good idea if your audience already knows what you're doing. Instead the prequel has a predictable and cliche setup with no hook to keep us interested. Simply discovering the UFO from the first film DOES NOT WORK especially when the people who find it are trapped in such a way they could never get back to their camp (seriously, their snowcat was stuck hundreds of feet down an ice chasm with a ten story drop to a metal ship). Carpenter could've had his movie begin just like this one, but he opted to do something smart and interesting instead.

2. The audience is ahead of the movie before it even starts. We already know what's coming, and it's clear the filmmakers are treading the same territory without trying something new. MacReady was a helicopter pilot so you do the same exact thing with the new male hero? How thrilling. If Cameron had opted to do another haunted house in space film like Ridley Scott, do you think Aliens would've been so damn good?


3. The creature itself has apparently gone full retard. It breaks out of the ice in front of two witnesses and alerts everyone to its presence. This completely contradicts everything about it that was established in Carpenter's film.

The one universal truth of bad horror films: morons deserve to die.

4. You get the ridiculous "I hear a noise so let me go die a total idiot" moment. Never seen that before...

5. Right after the creature claims its first onscreen victim in front of another witness that it leaves alive, it STAYS in the same spot so everyone can run over to shoot it and burn it. How fucking stupid is this thing? It's outside. It can run and hide anywhere. It never even tries to attack the people who are killing it. There is a scene like this in Carpenter's version except it did actually try to fight back as well as flee but then the creature was in a confined space so it couldn't escape so easily (it was also busy absorbing a lot of dogs). But here's a thought: STOP RIPPING OFF THE SAME FUCKIN SCENES AND MAKING THEM SHITTIER.

6. CG breath. When Carpenter made his film, it was actually cold since they shot on a glacier, and even when they did some shots later on sound stages, they made sure it was nearly freezing on the set. It makes a big difference both to the performances of the actors and the audience watching.

7. Same exact dissection scene. Why is this a bad idea? We've seen it before, and you're not going to top it especially not when you have the asshole in charge tell the pretty girl to help pry open the monster's stomach. If she is supposed to be smart, why would she touch that thing?

8. There's a dog guy just like in Carpenter's except you groan seeing him, because it's all too clear this is a poor imitation of an all-time classic horror movie.

You spent millions of dollars on this? WTF?

9. Use practical effects! USE PRACTICAL FUCKING EFFECTS! Then your monster won't look like an awful video game graphic. The face splitting effect on the helicopter looked HORRIBLE.


10. The sets look like sets, and they're overlit. Shadows are incredibly important in horror films... did you even see Carpenter's?

11. Don't show obvious CGI when someone looks through a microscope. I'm sure this is a shocker but let us see what cells actually look like when you use a microscope then you could digitally manipulate real footage so it doesn't look like fake shit or get real footage of a virus attacking cells! You have millions of dollars for fuck's sake! This isn't rocket science!

12. When the score isn't copying Morricone's, it sucks. Probably any music was doomed to fail here. You can't compete with Ennio Morricone. The best thing would've been to use very little music since it kills tension anyway and then when appropriate, use Morricone. 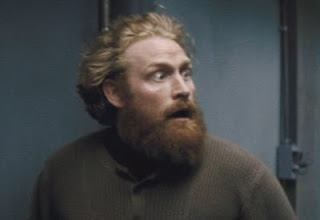 Who the fuck is this guy? I watched the movie, and I still don't know. Beard man #5.

13. Carpenter's film had distinct character actors with unique traits for them to play so each one stood out on his own and became memorable. They seemed like real people with a lot of contrast between them. In this prequel, you don't know who the hell most of the people are. They all blend together, and you couldn't care less about them. There's almost zero character development. You can really appreciate the genius of what Carpenter did when you look at this. There are still a lot of characters in his film but you remember them. They're not just faces with anyone-could've-said-this lines. In Carpenter's remake, you also got a sense of what it was like to be up at the Antarctic for so long. You saw them rewatching old VHS tapes, how fucking boring it was, the fact MacReady drank a lot while playing computer chess with a "cheating bitch," etc. Aside from one early joke (which is dialogue that doesn't show anything), it doesn't seem like being up there is much of a pain at all. You could tell the opposite was true just by the look on the faces of Carpenter's actors.

14. Mary Elizabeth Winstead (she really doesn't have much of a character except we know her occupation) gives the same speech MacReady gives right after they do the same exact thing... burning bodies outside in the snow. You can't just copy Carpenter's story beats. That will never fucking work, and you're constantly reminding us how much better Carpenter's version was. Think about T2. Is that the same story as the first? No, you have two Terminators racing to Sarah's son where the bad guy from the first film becomes the hero and then you have a boy becoming friends with a machine. Connor herself is different. It's not recycling the same shit.

15. Why would all these guys follow Mary Elizabeth Winstead? They've been up there a long time so I find it hard to believe no one tries to hit on her or make advances or anything. She is a very beautiful girl too, which just makes it even more unrealistic. No one questions her being in charge. They all just magically stand around and listen to her during MacReady's speech. This is supposed to be in the 80s too, and she's a foreigner up there at the Norwegian camp.

Watch out! That cartoon is going to eat you!

16. I like the idea of the creature not being able to copy inorganic material, but as far as black fillings and things, it could copy the color and shape if not the exact material because otherwise it would have to make something new in place of the other (ie white teeth where there were black fillings). Carpenter's blood test scene was a million times better and part of that is the lack of music during the scene, which increased the tension. One thing I did appreciate is the creature didn't reveal itself for no reason, which makes you question the test (the fact it hides so well here though and not when it first erupts out of the ice just underlines the shitactular quality of that earlier scene and the fact they didn't put much thought into it). And of course, I like the fact you realize the test ultimately failed, but then you see a shit ton of awful CGI to negate that positive.

17. When the MacReady-like character (I don't even know this prequel character's name) desperately needs to use his flamethrower, the exact same thing happens as in Carpenter's version where the weapon malfunctions. It's pretty much the same scene too right after testing each other. What the fuck is the point? Your time is better spent rewatching Carpenter's masterpiece.

18. The part on top of the Alien ship is just stupid. Amazingly stupid. It looks fake as hell. Terrible backgrounds. Laughable CGI. Plus, Mary Elizabeth Winstead (Kate I guess) falls how many stories and lands on a metal floor yet she gets up without even appearing to be banged up at all. Don't think during this movie or you might just think, "Wow, what a piece of shit." The scenes inside are just as bad.

What the fuck is that? Did someone's computer just have a stroke? Is the Alien ship playing tetris?

19. By setting up the opening of Carpenter's film, the prequel's ending ruins the other's mystery. Before you never knew why they were chasing a dog and trying to kill it. If anyone watches this shitty prequel before Carpenter's movie, they'll know why, and that proves just how big of a mistake this fuckin prequel was.

UPDATE: Most of the FX were actually practical, but they were painted over and replaced with shitty CGI. You can see ADI Studio's excellent practical FX below: 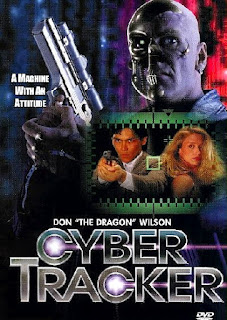 Wow... talk about shit. Never heard of this? Neither had I. Trust me. That's a good thing. Combine The Terminator and Robocop but throw in an awful cheap-ass look, ridiculously atrocious dialogue, seppuku-worthy acting, and a coma-inducing story. The cyborg in the opening scene actually wears a black leather jacket just like in T2. Even the music copies the iconic theme. But nothing beats, “You are to be executed… now.” See the “now” there is important, because you don’t want the criminal to be confused on when you’re going to execute him (please please be considerate machines). And you’ve got to add some shitty CGI too so a gun can morph out of the robot’s thigh. That’s so much cooler than Robowhatever. You need a green scanning mode too (red would be too obvious). Badass. Don’t forget to change the manbot’s voice so he sounds like a synthesizer crying for help. That always works.

I like the one crook telling the other, “That thing is hot man. That’s the piece I used to cap that old man.” That is some damn good storytelling there. Tell. Never show. And be sure to use the word “cap” when you tell. “man” is also a good way to make the bad guy hip. If you were worried they couldn’t maintain this level of quality all the way through, rest easy. They don’t disappoint.

In the next scene, some guy actually yells, “Computers killed my brother!” Amazing. They should’ve had another lady yell, “Computers killed my cat!” But the brother guy really sells his line. He has an expression on his face like somebody just crushed his crayons. It's priceless. Never trust dem compooturs.

When the female scientist leader whoever-she-is finds out all the members of the resistance team were killed, she turns away slightly and quietly says, "No." It's like she just screwed up spelling her name. Shucks... all dead. Hmm... I wonder what's for lunch? Bet you didn't know scientists wear white lab coats.

Guess what happens when a van flips over a car? It immediately bursts into a 10-story fireball. Awesome. Next time though make the fireball morph into Godzilla. Amateurs.
Posted by Doug Roos at 1:16 PM No comments: