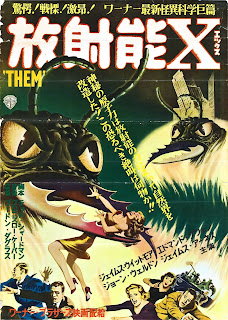 There are so many reasons to watch old, black-and-white classics. You get a peek into another time period, and as much as I like reading a good book, you get something so much more tangible with a film where you can literally see all the details (and even hear them). I'm sure a lot of this is romanticizing the past, but everything just seemed simpler back then. At least as far as movies go, they weren't afraid to give you a message, and I don't see anything wrong with that. It's a million times better than Transformers: Rise of the Convoluted Crap. Heck, Terminator 2 has a clear message stated outright at the end too, and it's a masterpiece. I have a special place in my heart for "old" films (the worst thing is when kids now think the '80s are old). I remember watching Them as a kid, and I was desperate to revisit it. I wasn't disappointed.

Sure, the giant ants are a little hokey at times, but I think they did an amazing job with them considering the limitations. Plus, the way they build up to that first reveal and use the sound of them is brilliant. I'm fond of all the characters too. People then seemed to have more manners and hold themselves to a higher standard although I know there were plenty of hideous problems then as well (the red scare for example, widespread smoking, less civil rights, etc.), but I always find it easy to like the actors in these films. You don't get a ton of moral complexity. Sometimes, it's nice to have obvious good guys and bad guys.

This film is still pretty harsh on occasion too. A good guy trying to rescue some kids get brutally slain by an ant. You also get the hallmark of every good movie: flamethrowers. Seriously, what more do you need?
Posted by Doug Roos at 3:16 AM 4 comments: