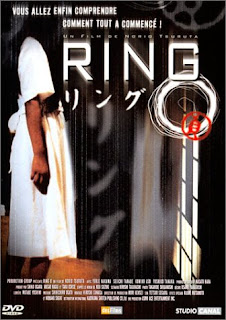 There's no way this movie is going to be good. Explaining the origins of Sadako is just a bad idea. It's not necessary, and if you remove all the mystery with some heavy-handed explanation, the whole thing will blow up in your face. Ringu told you everything you needed to know. But the fact is that's all wrong, because these filmmakers knew what they were doing, and they were incredibly smart about it. They very wisely keep much of the mystery intact and execute an extremely well-done character study that builds to an inevitable but somehow still shocking conclusion. The reason why it works so well is because they take the time to develop the characters so you actually care about them when the shit hits the fan. That's not to say the film isn't frightening. It is, but they're far more interested in atmosphere and tension than cheap jump scares. There is a love story, but it works, and like all great love stories, it becomes a tragedy. Making Sadako a beautiful, kind, and sympathetic girl yet also a terrifying, heartless, and deadly monster seems like an impossible problem to solve. You have two extremes that are complete opposites, but they come up with a clever way to do it and deliver a haunting heart-breaking story that no one should miss. George Lucas, this is how you do a prequel.
Posted by Doug Roos at 3:03 AM No comments: 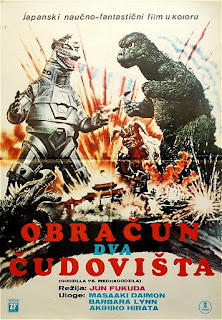 Mechagodzilla is my favorite of all Godzilla's adversaries largely because the original design is so damn well done... the eyes without irises or pupils, the spike on its head, the sharp pointed teeth. It looks like something designed to destroy. It's fuckin badass, and he really represents the perfect opponent for the King of the Monsters as illustrated by the scene where Godzilla fights Godzilla (who could prove to be a more worthy nemesis than himself?). Sure, the story is pretty silly with the space monkeys in disguise (somebody loved Planet of the Apes a little too much), but the prophecy about a monster appearing to destroy the world certainly sets the stakes high enough. I tend to forget about all the crap with the humans (you watch a Godzilla movie for Godzilla and the monsters, not the people... this is a versus title after all). That said, the mystery of the artifacts, the space titanium, and the cave base are handled well. Plus, our heroes are sympathetic enough especially when they're about to be barbecued in the red torture room of death. This film isn't playing around. All those people could've easily died if they hadn't gotten lucky and outsmarted their captors. 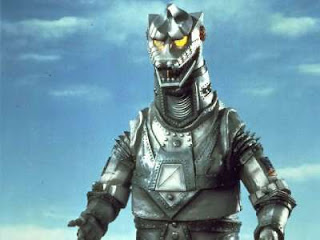 I just love how bloody the film gets when these two monsters fight. It gives those scenes a lot more weight and shows that Mechagodzilla does inflict some real damage. After the first battle, which our protagonist loses, a ton of blood appears in the water where Godzilla fell in. That sets a dark tone... we don't see Godzilla again for a while so it's not like he just walked away. You know he got hurt, and he could've died for all we know at that point (yes, he's invincible, but don't forget, if it bleeds, we can kill it). Even the first appearance of the disguised Mechagodzilla is brutal when it rips apart Anguirus' jaws, and Godzilla is covered in blood during much of the final fight. The red stuff literally sprays out of his wounds multiple times as Mechagodzilla attacks him with its various weapons, which are pretty impressive in their diversity and strength (neither Godzilla nor King Caesar could penetrate Mechagodzilla's spinning-head force field).

King Caesar isn't the greatest, but I grew up with the movie so I don't mind him. That damn song, however, is forever embedded in my brain (help me), but I like how two monsters have to team up to bring down Mechagodzilla, reinforcing the idea that Godzilla has met his match. Better yet, I love how the humans have to interfere to disrupt Mechagodzilla's controls in order to win the finale. Mechagodzilla's weakness proves to be his dim-witted hairball creators so the notion that Godzilla couldn't defeat him without help is preserved all the way through. Yep, I wanted Mechagodzilla to win. He could've at least killed King Caesar. You think it's fair King Kong beat Godzilla? That's the dumbest thing I've ever heard, and don't try to tell me it's different in the Japanese version. I wish. Godzilla should've burned that moron to a crisp. Who wrote that crap? And yeah, Mechagodzilla should've won. Stupid space monkeys. Wait... why the hell are they monkeys?
Posted by Doug Roos at 9:40 AM No comments:

I grew up watching Godzilla. TNT's MonsterVision is one of my fondest childhood memories (somebody needs to bring back Joe Bob Briggs). I love practical effects: miniatures, guys in suits, squibs, animatronics, etc. and a large part of that is Gojira. 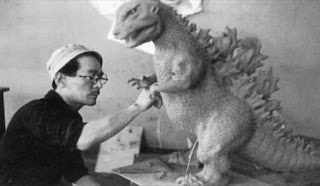