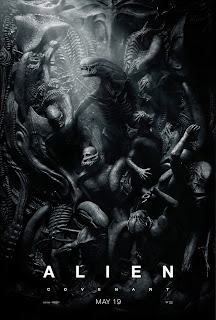 I was very mixed on Prometheus. The guy who maps the ship gets lost in it? The supposedly super smart scientists decide to throw caution to the wind and remove their helmets? Gee, why don't I pet the Alien cobra? He is her father... uhm so? This isn't Empire Strikes Back. In fact, I didn't even want to see Covenant. I figured I'd never see another good Alien movie again. Well, I'm happy to admit I was wrong, but I have to say I'm shocked at all the negativity surrounding this film. Whether I wanted to or not, I read everything people said about it beforehand and yet despite all that, I still liked it. A lot. To me, it's a billion times better than Prometheus, which again is not a high compliment since I hated the stupid characters in that one (and why didn't they leave in the deleted scene of the engineer speaking at the end?) but damn Ridley Scott got me. I did end up liking the characters in this, Fassbender was phenomenal, and the script made sense. Someone said there was a 5-minute flute scene, and like any rational person, I thought, "Damn, that sounds bad." Yet said scene has two Fassbenders in it, doesn't feel long at all, and is actually quite interesting since there's more going on than just learning the flute.

Gonna have to wade into spoiler territory here so stop reading now if you haven't seen it, but I don't understand why some are complaining Ridley screwed up the mythology with this one. Uhm, he did that already with Prometheus by saying the Space Jockey was just a stupid suit. The engineers still created the black goo. David simply refines it. Why is that bad? Sure, the gestation period is very short but David has been tinkering with his specimen a ton and I don't think we can assume the eggs in the first Alien film's Derelict Ship came from this same strain. Plus, from a practical point of view, no one these days would put up with Alien's deliberate, labored pace and AvP already jacked up the gestation time. Anyway, I love David playing creator, his great interactions with Walter, and I ended up liking Daniels and Tennessee a lot too. The Neomorph was fantastic. Same with the classic Xenomorph. I guess they painted over the practical FX with CGI, which I hate, but it looked quite good. I don't know why they needed to have practical built then in the first place unless they wanted to help the CG artists by having a real model to build off but I hope they warned the poor practical FX guys they were going to do that. Regardless, I loved it. Sometimes, the characters might make questionable decisions but they're not supposed to be super scientists in this one and they all seem realistic given how the android is meant to be their protector, they're in high stress situations, etc. People seem to be nitpicking the hell out of it and making little things seem all encompassing when they're not. At all. My dad called it, "Boring." What the heck. I was never bored in the slightest. At the beginning, I was still skeptical (listen for the music though... seems quite a few missed that) but it won me over big time. My buddy and I are both huge Aliens fans and we loved it. Now I hope Scott gets to finish this series of films but the poor box office worries me.
Posted by Doug at 4:33 PM No comments:

Resident Evil: The Final Chapter (2016) is astonishingly awful thanks to the rancid editing. 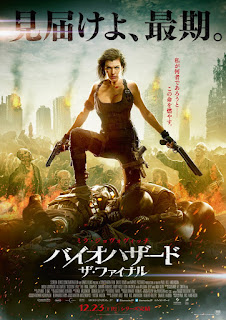 Like most who played the original Resident Evil games, I wanted a film series closer to that (really curious how Romero's adaptation would've panned out), but Paul W.S. Anderson's efforts held a certain guilty charm. At least, some of them. Well, I hate to admit his latest, and supposedly final, sequel suffers from some of the worst A.D.D. editing you'll ever see. It ruins the entire thing. It's cut so fast you can't tell what's happening, you can't enjoy anything, and you get a headache trying to decipher what the fuck is going on. It's a shame. I never want to root for a filmmaker to fail. Making any movie is a crazy shit ton of work. Try it. You'll see. Sure, it's easy to watch a film and say, "This sucks! A mutated baby ant could do better!" But actually making one, and making a good one, is insanely-difficult, grueling work. It ain't fun. Ok, sometimes, it's fun, even a lot of fun, but it's still hard work. If you don't believe me, try it. I love making movies (in my tiny little nobody indie world) and I ain't complaining at all but way too many people think filmmaking is easy. They think you can magically do whatever you want without any limitations. What a fairy tale, and the higher your budget, the more strings attached aka more pressure, more outside interference, more likely something is going to get screwed up, etc. etc. Heck, your own ego can easily derail you. Making a movie is like navigating a minefield from hell especially in Hollywood. Just watch the documentary A Foreign Filmmaker's Guide to Hollywood. Oh wait, you can't since gee, big surprise, it hasn't been released in America. Ok, end rant. Resident Evil: The Final Chapter. I wanted this to be good. Iain Glen is back. An extraordinary actor who doesn't get nearly enough roles worthy of his talent. I like Milla Jovovich (The Fifth Element!). Paul W.S. Anderson has done films I'm extremely fond of such as Event Horizon, Soldier (Kurt Russell!), Mortal Kombat (eh, sure it wasn't R-rated, and I can't rewatch it, but it was good at the time! great music!), etc. Well, one question: what the hell happened with the editing? Seriously, it ain't bad. It's hideous. It's migraine inducing pain. Pain pretty much sums it all up. It's like they don't want you to see anything. It's impossible to believe this is the same filmmaker who made Resident Evil: Afterlife (one I actually quite liked). Did the studio kidnap the film and butcher it or what? Why, oh why, did they cut it like this? And yes, finally got back access to my blog. I'm sure you're thrilled. Blogger support is a non-existent joke (it sucks ass).
Posted by Doug at 11:18 AM No comments: