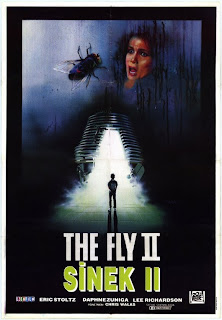 David Cronenberg's The Fly is one impossible act to follow. It's a classic with a flawless script, incredible acting, tight pacing, amazing practical FX, and a haunting tragic score (the music at the end is so far beyond brilliant, it makes ninjas explode out of my face). Yeah, it's that good.

So how does the sequel measure up? Obviously, it's going to take a beating. Could anybody top the original? Besides Cronenberg himself? I doubt it, but you know what I actually love The Fly II. It's not perfect, but it has a certain 80s charm to it. And Daphne Zuniga is a large part of that. She plays her role with ease and makes the love story believable. It's not hard to see why someone would fall for her. Everyone likes to rag on Eric Stoltz, but I think he does a good job in this, and the villains of Bartok Industries are pitch perfect. Of course, Lee Richardson does a stellar job as the evil head honcho, switching from a sweet surrogate father to a greedy heartless bastard in no time. I never see Gary Chalk get any credit, but he's absolutely fantastic as Anton's second-in-command. I love his death scene and especially the moment right before when he gives his boss a crazed pissed-off look as he reloads his gun. It's a one-dimensional part (and it had to be), but he nails it.

I much prefer the design of the Brundle Fly in the first film, but the monster in the second one is a lot of fun, and it has a lot more screen time, which means it's that much harder to pull off. It works though and seeing it melt faces off guards is another highlight of the movie. Ok, onto the story. An early treatment for the sequel had Seth's consciousness surviving in a Telepod computer with Bartok scientists enslaving him to develop the system for cloning purposes! WTF! That sounds a little nuts. Then again Cronenberg endorsed it at the time so maybe it would've been good. Who knows. But what do we get? Seth's son growing up inside Bartok trying to figure out his father's work so he can cure himself. With a love story and a betrayal. A much more classic monster movie, and I'm always a fan of those. And of course, the dog. Sure, the little mutated critter might be cheap, but the dog gets me every time. And it makes you hate Anton. It works. Frank Darabont worked on the script. No wonder it's good even if other cooks messed with the recipe.

The directing is solid. No shaky cam. Again, it's not Cronenberg (and I do love my Cronenberg... Scanners anyone? The Dead Zone?), but it's well done and clear. The music by Christopher Young (Hellraiser) also fits the feel of this film. It's a little more light than Howard Shore's phenomenal work (damn, I love that score), but it's good.

The Fly II is worth your time and then some. I love it, and I wish they'd make more monster movies like it (and definitely a helluva lot more like the original, but Cronenberg is Cronenberg, which is what makes the first so extraordinary). 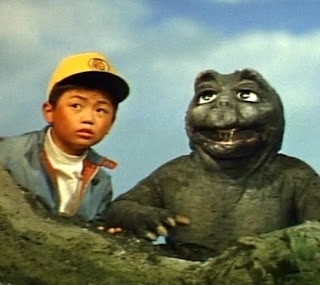 Not a horror movie you say? Watch it, and when your eyes bleed out their sockets, try telling me that. Where to start? Did you like some other Godzilla movies? Good, because you get to rewatch them in this. Everything is reused footage aside from the me-like-apples retard conversations between Godzilla's brain-damaged son and some Japanese kid (who has probably hanged himself by now). To sum it up in the most sophisticated manner possible, it felt like my brain realized some foreign entity declared war on it so it lathered itself up with fire and started playing the banjo in fire-resistant overalls until it decided the only reasonable solution was to self-destruct in a pair of beige blue rocket pants. In other words, I think I lapsed into a coma and died. Yes, I'd recommend it. I think the moment the light from the movie hits your eyes, your pride retreats into your skull and melts. This is your guaranteed ticket to shame and remorse. Ever wanted to go full retard with a fat little Barney impersonator? What about a green bug-eyed midget that blows smoke rings? Meet Godzilla's Revenge. And I actually like Godzilla's son in other movies. "But it's got Godzilla in it," you say. "Can't be that bad." That's what I thought when I watched the American Godzilla movie, and then my soul remembered the meaning of pain. Masochists, this one is for you!
Posted by Doug Roos at 2:50 PM 1 comment: 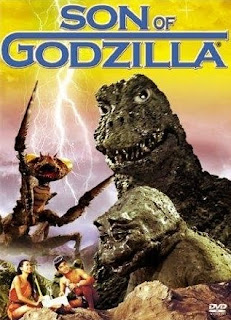 Where to begin... Godzilla himself looks like a saggy mutant hippo with one enormous fat neck that's bigger than his actual head. It's by far the worst of the suits. Couldn't they just reuse an old one? The giant praying mantises are actually pretty well done as is the spider Kumonga (though the fact they're his only enemies is ridiculous), and I actually like the scenes between father and son, but overall, this film is extremely disappointing. It's nothing compared to the masterpiece of the original or my personal favorite, Godzilla 1985. All the sets and everything look so cheap, which I'm sure they were. And besides the big guy's laughably bad appearance, any sense of danger from him is gone as well. There's no king of the monsters here. Obviously, this was aimed at kids, and it shows. It's a complete 180 from the atomic nightmare Godzilla was supposed to represent. No cities are destroyed. Godzilla couldn't even stay in shape for this one. God, that suit looks awful. My eyes are crying out for help. Did they want him to be deformed? What the hell happened? Did he finally let himself go? Jeez, that's one of the worst things I've ever seen. Wake me when it's over.